Vote widely praised by Arab lawmakers, but also sparks accusations that one MK may have collaborated a little too closely with Netanyahu in order to secure the extension. Posted October 26th 2020

View of the main road in the Arab-Israeli village of Majd al-Krum, near the northern Israeli city of Karmiel, on November 8, 2017.(Hadas Parush/Flash90)

The cabinet voted on Sunday to extend by a year a multi-billion dollar program aimed at closing extensive gaps between Jewish and Arab communities in Israel. The program, known as the 922 plan was set to expire in December, with over a third of its funds still unused.

“It must be understood that economic investment in Arab society contains enormous economic potential; in my opinion, it is a clear interest of the Israeli government,” said Social Equality Minister Meirav Cohen after the vote.

The decision was widely praised by Arab politicians, but also sparked accusations that one Arab MK may have collaborated a little too closely with Prime Minister Benjamin Netanyahu in order to secure the extension.

The plan, initiated in 2015, allocated NIS 10 billion ($2.96 billion) to reduce widespread inequalities between Arab and Jewish communities in Israel. The extension will add another NIS 1.7 billion ($500 million) to the plan through the end of 2021.

The decision is even more noteworthy given the severe budget crisis facing Israel due to the coronavirus and two costly national shutdowns.

The extension will allow Arab municipalities time to use the unspent money, remove some restrictions, and act as a stop-gap until the expected passing of a new five-year-plan — called, appropriately enough, 923 — set to be approved in 2022.

“The 922 plan acted to shrink the inequality and develop infrastructure in Arab society, but this mission is not yet over. As such…, we have advanced an additional budget for 2021 and we’ve removed operational obstacles,” said Yael Mabrouch, a senior official in the Social Equality Ministry.

While some of the unspent money was a result of it being allocated to long-term construction projects, spending was also hampered by bureaucracy.

“The budget, especially with regard to planning and building, imposed many conditions which municipalities could not really fulfill, and much of the money never made it to us,” said Arara Mayor Mudar Younes, who leads a union of Arab local municipalities. 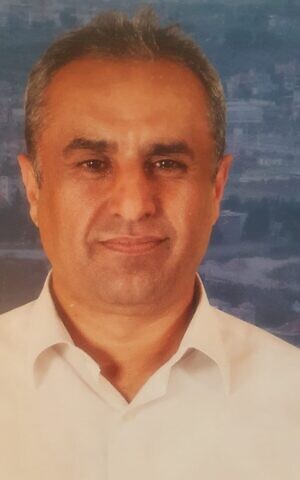 In an effort to ensure that the remaining money is spent, the government’s decision designated an additional five cities as “strategic cities” on Sunday, meaning they will receive additional funding for planning and building. The same decision also removed some of the conditions for building.

Arab Israeli MKs largely hailed the move to extend the 922 funding and remove obstacles to its use by local municipalities.

“Removing obstacles to receiving the budgets constitute an essential step in reducing the gaps which hurt all Arab citizens. The path to equality is long, but we will not give up,” Joint List chairman Ayman Odeh said in a statement.

While MK Yousef Jabareen praised the decision to extend 922 by a year, he said that “billions of additional funding is needed” to create “true equality.”

Jabareen said 922 had not yet resulted in “essential change,” and called for the new plan to include “a serious expansion of Arab jurisdictions, the establishment of industrial parks, including hi-tech, and advancing Arab education.”

Activists said 922, widely seen as an unprecedented action by the Israeli government to support Arab infrastructure and economic development at the time of its approval, had been a great success, but much more work was still needed.

Ofer Dagan, co-executive director of the shared society NGO Sikkuy, which advocates for equality between Arabs and Jews in Israel, highlighted some of 922’s key achievements, including improving the integration of Arab women in the workforce, expanding public transportation in Arab villages, and increasing public trust and collaboration between Arab municipalities and the Israeli government. 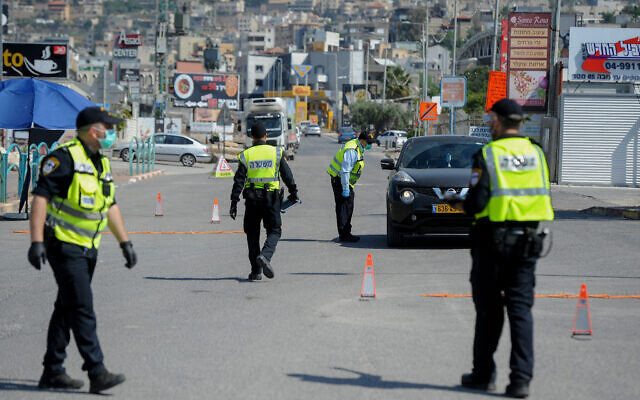 Police at a temporary checkpoint in the northern Arab town of Deir al-Asad, April 18, 2020, following the government decision on a full lockdown on the town. ( Basel Awidat/Flash90)

“I don’t think that the manner in which Arab municipalities succeeded in reducing the rates of coronavirus infection, which required coordination with the government and the (IDF) Home Front Command, could have happened without this improved trust which had been acquired over the last few years,” Dagan said.

But he noted that the improvements could have been far greater if there had been fewer restrictions on actually receiving the money.

While the extension was widely praised, the move also causes some tensions within the mostly Arab Joint List party, with some noting that the vote came only days after MK Mansour Abbas, who has been the Joint List point man for the 922 plan’s approval, helped Prime Minister Benjamin Netanyahu avoid a Knesset embarrassment.

Abbas ignited a firestorm of controversy within the bloc of mostly Arab parties last week after he helped Knesset speaker Yariv Levin nullify a vote which would have authorized a Knesset committee of inquiry into the submarine affair, which involves several of Netanyahu’s closest associates. Some Joint List members have even accused Abbas of conducting backdoor deals with Netanyahu to ensure the plan’s passage.

MK Mtanes Shahadeh accused Abbas of “coordinating” with the Likud as part of a quid-pro-quo for passing the 922 extension. “My friend Mansour Abbas erred. The Likud is not our partner. So it was and so it will be,” Shehadeh wrote on Twitter on Thursday.

Abbas, who heads the Ra’am party in Joint List is reportedly considered to be too friendly to the ruling coalition and to have his own channels of communication with Netanyahu’s Likud.

“There will always be political disagreements inside the Joint List, but we also need a uniform framework of cooperation. The approach that MK Abbas is taking can’t create such a framework,” MK Hiba Yazbek from the Balad faction told the Haaretz newspaper. 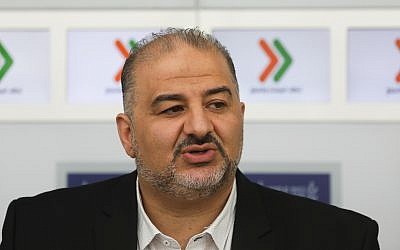 Mansour Abbas of the Ra’am party holds a press conference after a meeting with President Reuven Rivlin at the President’s Residence in Jerusalem on April 16, 2019. (Noam Revkin Fenton/Flash90)

Abbas, for his part, said on Sunday that the sudden passage of the 922 extension was unrelated to his decision to agree to nullify the Knesset vote. He called rumors of backroom deals with the Likud “imprecise publications.”

“I conduct myself in a transparent, professional, efficient, and respectable manner with all governor actors, not in accordance with the ‘deals’ which some have tried to accuse me of,” Abbas said in a statement.

Last Monday night, Abbas had read out a series of recommendations to Netanyahu, who was sitting in the Knesset at the time, including passing an extension for 922. According to Abbas, the prime minister had already responded favorably at the time.

“I brought up our righteous demands before the prime minister during a Knesset session, and he agreed, even before the Knesset vote incident,” Abbas said.

A group of human rights organisations have filed a complaint with the International Criminal Court (ICC), accusing BAE Systems and other arms manufacturers based in Europe of being party to alleged war crimes in the conflict in Yemen.

Their 350-page dossier argues that aircraft, missiles and other arms made by 10 companies “contributed to the capacity” of the Saudi-led coalition in the conflict, which is accused of bombing schools, hospitals and civilians in 26 airstrikes.

Radhya Almutawakel, the chair of a Yemeni organisation Mwatana for Human Rights, said: “Saudi/UAE-led coalition airstrikes have caused terrible destruction in Yemen. Weapons produced and exported by the US and Europe have enabled this destruction.

“Five years into this war, the countless Yemeni victims deserve credible investigations into all perpetrators of crimes against them, including those potentially complicit.”

Over 100,000 people are estimated to have been killed since war in Yemen broke out in 2015, including 12,000 civilians in directly targeted attacks. The Saudi-led coalition intervened in 2015 against the Iran-aligned Houthi rebels with a pattern of airstrikes that has brought repeated humanitarian criticism.

The 26 strikes specifically cited, where 135 people were killed and 181 injured, include what are described as indiscriminate attacks on hospitals and schools by bombers from Saudi Arabia or its ally the United Arab Emirates, and where remnants of bombs made by companies based in Europe were discovered.

The human-rights groups, who also include Amnesty International and Campaign Against the Arms Trade, met with members of the prosecutors’ office on Wednesday afternoon in The Hague, where the ICC is located, to hand over the file.

Linde Bryk, a lawyer representing the human rights groups said: “By seeking an investigation into corporate executives and government officials the communication seeks to hold to account those selling arms to countries known to have committed war crimes.”

BAE Systems is cited in the complaint because the British arms giant is the principal supplier of Eurofighter Tornado and Typhoon jet aircraft to the Royal Saudi Air Force, which has conducted a string of deadly strikes Yemen, as is the UK arm of Raytheon, which manufactures Paveway IV guided missiles used in the conflict.

In the case of BAE Systems, it argues that the company “purposely intended” to supply the Saudis with arms, and after the conflict began company bosses would have become aware of “the abundance of reporting on the violations being committed”.

It argues: “The use of Eurofighter and Tornado jets by the coalition in Yemen – that the realisation of the war crimes, for example the intentionally targeting of civilians, attacks on schools, hospitals and cultural heritage, was a consequence of the assistance in the ordinary course of events.”

It also references Airbus companies in Spain and Germany, France’s Dassault and Thales, Italian group Leonardo, the Italian arm of Germany’s Rheinmetall and units of European missile manufacturer MBDA in France and Britain. Dassault supplies fighter aircraft to the UAE.

Companies based in the UK are the largest exporter of arms to Saudi Arabia between 2015 and 2019, accounting for €5.8bn worth, according to publicly available data in the complaint. Firms based in France were recorded as doing €2.5bn worth of business, and their German equivalents €1.5bn.

BAE Systems has previously defended its sales to Saudi Arabia, saying it is a defence company which complies with UK arms export regulations. New arms sales to Saudi Arabia which could be used in Yemen have been on hold since June when the British court of appeal said that ministers had not properly assessed the risk they would be used in breach of international humanitarian law.

Raytheon’s chief executive of international operations has previously said the company’s role is to comply with existing arms export policies.